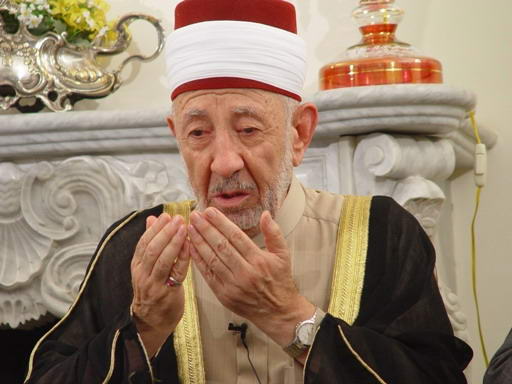 Today, one of the contemporary giants of the Islamic tradition, Dr. Muhammad Sa’id Ramadan al-Bouti (may Allah show him mercy), was assassinated along with a number of others. The details of the circumstances surrounding his death are still forthcoming. I find it hard to resist the temptation to write about him–not only because I have benefited from reading most of his books (at least those I know of)—but also because I have tried my best to refrain from commenting about things happening in the Muslim world, since it seems that it’s hard to have a dispassionate conversation with anyone whose heart is closely intertwined with what is happening there, especially over the past 2 years. Having a dispassionate conversation would necessitate trying to exercise some degree of objectivity, even though I don’t believe true objectivity really exists. The other reason I gave up speaking about international affairs happening in the Muslim world is also because I feel that the only way that Muslims living in the “West” will be able to truly chart a course towards social and political empowerment is focusing more of their attention on what’s happening here and now as opposed to allowing what’s happening over there dictate to us what we need to prioritize in our lives here.

The distance between the masses and the scholars/academics is nothing new in history. In the Islamic context, though, this rift has been widened considerably since the dawn of European colonization of Africa and Asia, especially in countries where Islamic Studies is looked upon by the secular class as being a kind of occupation fit only for those who are too intellectually inept to study things like medicine and engineering. Muslim scholars by and large prior to the Arab Spring were looked upon as “out-of-touch” with what’s happening in the lives of the masses—and indeed there is a lot of truth to that allegation. However, the condition in post-Arab Spring Muslim territories has claimed both its victims and created some unlikely and unsung heroes.

Studying in the Muslim world during the late 90’s introduced me to the written works of the likes of Shaykh Ramadan al-Bouti’s, Al-Zuhayli, as well as to their enormous contributions to the Islamic intellectual and scholarly tradition. During those days, Dr. al-Bouti and many others were held up as champions who deserved due reverence for they represented the best that our legal, theological, and ethical tradition had to offer. And reverence they did undoubtedly receive. Ironically, it was a forgone truth that Dr. al-Bouti had a relationship with the Assad family, and when on one occasion he was pressed to justify his relationship, he responded in wise fashion by highlighting the fact that if a scholar of his caliber ever chose to criticize the regime it would mean certain death. And in death that would mean one less scholar with the tools to guide the masses out of darkness; something they were thoroughly in need of. In his absence (or the absence of those like him) there would undoubtedly arise many pedantic pseudo-scholars giving fatwa with improper qualification to do so thereby steering the remainder of the community to their annihilation. Whether you consider that excuse valid enough or not, there is no doubt that Dr. al-Bouti’s fears were real and he understood the risks in certain kinds of actions.

Dr. al-Bouti made his opposition to the Israeli occupation and persecution of the Palestinian people and their right to return to their homeland totally plain. As a matter of fact, many of the same people who criticized him in life after the start of the Arab Spring also supported him in his views prior to the past 2 years. Rather, Dr. al-Bouti took things a step further condemning America’s complicity in Palestinian persecution via Israel, passed a controversial fatwa endorsing suicide bombings against innocents inside of Israel, specifically, to the exclusion of other places, and also gave a fatwa forbidding Muslims born in Muslim lands from emigrating to Western countries. Because of his fatwa on suicide bombings and a similar one issued by Dr. Yusuf al-Qaradawi, it was popular to hear on the daily newscast characterizations of these Palestinian operations against Israelis—not as “suicide” bombings–but as “martyrdom operations” (‘amaliyaat ishtishhaadiyah).

Even though over the years we have come to understand and accept the error in such fatwas—which were actually supported by a lot of Muslims who now today decry the injustice of tyrannical governments, such views found great appeal amongst those resisting the Afghan and Iraqi invasions. Consequently, the invasions took much longer than anticipated to achieve their goals. And, now, we see those same operations used against the same Muslims who endorsed it in one or more of its forms, unfortunately.

It’s funny how someone who was held up as a champion just a few years ago could now be berated as a “traitor” or “hypocrite” by the same people who valorized him even when they knew he was a friend of the Assads long before the present. No! If anyone was consistent, it was Dr. al-Bouti, and that’s regardless of whether or not you agree with his approach to political matters.

Yes! He spoke out in opposition to the Syrian uprising at its start, but since that time he has largely maintained silence on the matter. Some desired him to speak out in condemnation of the regime as others did (some only after they saw that the peoples’ front actually might win). But, why should a man who spent his life teaching majority Sunni doctrine that rebellion against one’s governor was sinful, especially when the odds of succeeding militarily were bleak, suddenly change his view because it accommodates the masses? Shouldn’t he deserve some credit for sincerity to his principles at least? Or should he have yielded to those calls by imitating those scholars who seemed to simply go with the people aiming to avoid a fate similar to that of Shaykh ‘Ali Goma after reiterating his own belief in the majority Sunni doctrine forbidding one from rebelling against one’s governor? (Of course, there is more that can be said about this)

If every Muslim scholar is expected to be wagged by every tail of the masses thereby avoiding being labeled a traitor for abandoning “the people’s movement”, should we not also berate people like Ibn ‘Abbas and Ibn ‘Umar for not supporting the rebellions of Imam al-Husayn and Ibn al-Zubayr against Al-Yazid? Should we not also have the right to berate those Sahaaba who refused to participate in the civil strife that occurred during the times of Abu Bakr, the times of ‘Uthman, or the times during the reign of ‘Ali b. Abi Taalib?

The truth is that Muslims are confused. And that includes many Muslim scholars. The best of them in my opinion are those who choose silence over those who choose to speak and encourage people to risk life and limb–especially if they do so while enjoying the safety of their homes and spend no time identifying the points of injustice in their host countries.

At any rate, I would like to end this missive with a number points for us all to reflect upon:

1 – The time of divine communication ended with the Prophet Muhammad, Allah bless and grant him peace, over 1400 years ago, so there is no one on the earth who can claim to know the Creator’s intent nor guarantee His aid will come to support any endeavor we embark upon.

2 – In trying to ascertain the truth of any report, we must remember that there is a difference between a “descriptive” declaration and one that is “prescriptive.” The former is falsifiable (i.e. could be true or false). So, when someone tells you, “So and so was killed by so and so”, the the credibility of the source is important to check. While we may incline to a certain view on something, remember that just because it makes sense doesn’t make it true. It might be, but it is still speculation. An example of a prescriptive statement is “Lay down your arms.” This is not falsifiable, but, rather, asks for a kind of action to be followed. We have to be sure that we don’t make the mistake of interpreting the former in the way we should take the latter.

4 – Injustice needs to be fought against everywhere, not just over here. It has to be challenged even in our home and host countries.

5 – God judges by a different criterion than people do. For that reason, even when the majority of people develop an opinion of an individual, that cannot be interpreted as God’s final and definitive judgment of that person’s life.

6 – People will be judged by the state they were in at the end of their lives.

7 – No person is so evil that we should despair that he/she will and can change for the better.

Lastly, the way that I feel, regardless of what anyone may think of Dr. al-Bouti and his position in Syria, to be Anti-Assad, Anti-Qaddafi, Anit-Saudi, or even Anti-America is not a tenet of the Islamic faith. Muslims have every right to differ about politics. But, because I differ with you shouldn’t mean that I mean you harm. If anything, it should be seen as a form of love, since my view is rooted in the desire to not see you suffer. What is most unfortunate about the case with Dr. al-Bouti is that it seems that some people may have felt differently about that. Be his assassins members of the Assad regime or the opposition, I wouldn’t want to live under either group of governors.

May Allah show mercy on Dr. al-Bouti, mercy on the people of Syria, and mercy on the Muslims. May He guide our scholars to work in the best interest of the Umma by “leading” not “following.”