The mention of white supremacy typically brings to mind the overtly racist rants and waywardness of groups like the skinheads and Ku Klux Klan. However, our focus on such overt racism blurs a much deeper spiritual and psychological impact of ‘whiteness’ as a key element of Euro-Capitalist domination. In this special session, Dr. Sherman Jackson, seeks to unveil some of the hidden realities of white supremacy! What are the possible psychological effects of Euro-Capitalist Empire on Muslims, as it relates to our religious fidelity and loyalty to the doctrine of divine unity (tawhid)?

Dr. Jackson holds the King Faisal Chair in Islamic Thought and Culture and is professor of religion and American studies and ethnicity at the 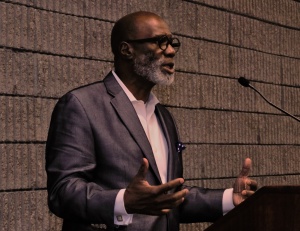 University of Southern California.Dr. Jackson received his Ph.D. from the University of Pennsylvania and has taught at the University of Texas at Austin, Indiana University, Wayne State University and the University of Michigan. From 1987 to 1989, he served as Executive Director of the Center of Arabic Study Abroad in Cairo, Egypt. He is the author of several books, including Islamic Law and the State: The Constitutional Jurisprudence of Shihâb al-Dîn al-Qarâfî (E.J. Brill, 1996), On the Boundaries of Theological Tolerance in Islam: Abû Hâmid al-Ghazâlî’s Faysal al-Tafriqa (Oxford, 2002), Islam and the Blackamerican: Looking Towards the Third Resurrection (Oxford, 2005) Islam and the Problem of Black Suffering (Oxford, 2009), and most recently Sufism for Non-Sufis? Ibn ‘Ata’ Allah al-Sakandari’s Taj al-‘Arus (Oxford, 2012).